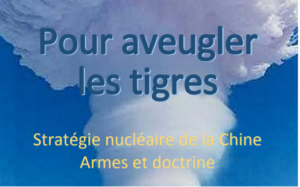 When the explosion of the first Chinese nuclear bomb was announced, on October 16th 1964, the doctrine of use of the Chinese nuclear weapons had already been fixed. It was true to the principles of moderation and cautiousness expressed by Mao Zedong and Zhou Enlai: Chinese atom is exclusively defensive; it is sheltering the country from nuclear blackmail. Strictly dissuasive, it is only directed towards nuclear powers. The US is unable to believe in the sincerity of such assurances which are entirely contrary to their own doctrine. Nevertheless, if more watchful, they could be swayed, if not convinced, not so much by the consistency of the Chinese announcements, as by the small number of nuclear heads and the features of the vectors optimized for strategic use.

The first rank missiles, ready for action (that we would call pre-strategic in France), are the DF-26 missiles. They will be remembered as the main threat to the ships and the American bases in Asia-Pacific area; they have to be watched nonstop. These forces, combined with missiles DF-17 and DF-21 with conventional loads, called “aircraft carriers killers”, are there to counter the only serious threat to China : a possible aggression by the sea forces led by the US in South China.

In order to oppose the 7th Fleet maneuvers, one can suppose that China, which forbids the launching of the first strike, has conceived such warnings as not to allow any doubt about the country’s ultimate determination. According to the Chinese philosophy, these warnings will seek to cause surprise and fright. The most dramatic could be the evacuation of large Chinese cities: Guangzhou, Shenzen,Tianjin, Wuhan. One can imagine the distress of inhabitants of Chicago, Houston, Philadelphia, if their Chinese peers were evacuated for fear of nuclear strikes. Supposing it was not enough, they could resort to a last non lethal warning: a very high altitude explosion, generating electromagnetic pulses, offshore, between Los Angeles and San Diego, thus cutting off for days electrical networks on American territory.

Can we imagine an American President persisting? Would a few islets in the China Sea, or Taiwan’s independence, be worth millions lives of American citizens? The game is over before starting. This is the major result of the study.

A victory for China, but what price is it? An impossible peace, and the US as enemy for decades anew. China knows it and is cautious; year after year it threatens but is careful not to strike. With the US is it not better to seek a compromise, which would definitely end the cold war in China Sea? Like reuniting the two Koreas, and a status guaranteeing Taiwan’s autonomy. A win-win agreement, which would allow initiating nuclear disarmament.

There are only facts and commonsense in what has been summarized here, and is developed in “Blinding the tigers”. Nevertheless, what is obvious is not perceived everywhere, in particular where it would be most necessary. That’s why analyses, Chinese publications and announcements, with a touch of French military culture, in order to understand and assess these testimonies, could be useful. That’s what this work pretends to achieve.