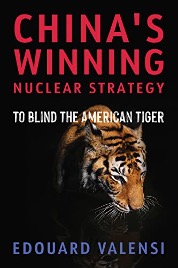 “The global competition between the United States and China is now a proven strategic fact. Even if they trade freely, these two nations are openly confronting each other, relying on the military bases on which their power is founded. What are the forces at work? What could the outcome of these confrontations be? This is what “China’s winning nuclear strategy” is all about.

In its first part, “China’s winning nuclear strategy” a book both fully documented and accessible, presents a detailed analysis of Chinese nuclear capabilities and in its half exposes what could happen if the United States and China were to openly confront each other militarily; about Taiwan for example? The book reconstitutes what could be the Chinese nuclear doctrine and the escalation process of China’s deterrence. A strategy whose objective is to terrorize the population of the great American metropoles and without a shot being fired, surprise the American President and bring him to negotiate. A threat hardly perceived in the United States, and to which this book shows that they might nevertheless be able to respond

Edouard Valensi pursued most of his career within the French Ministry of Defense. He has been in charge of strategic and prospective studies related to nuclear deterrence, leading the team programming the French strategic weapons systems. In these functions, he developed a method of strategic analysis based on the exploration of very extensive document bases in order to identify the risk his country was facing. Today Edouard Valensi is one of Asie21’s active member.