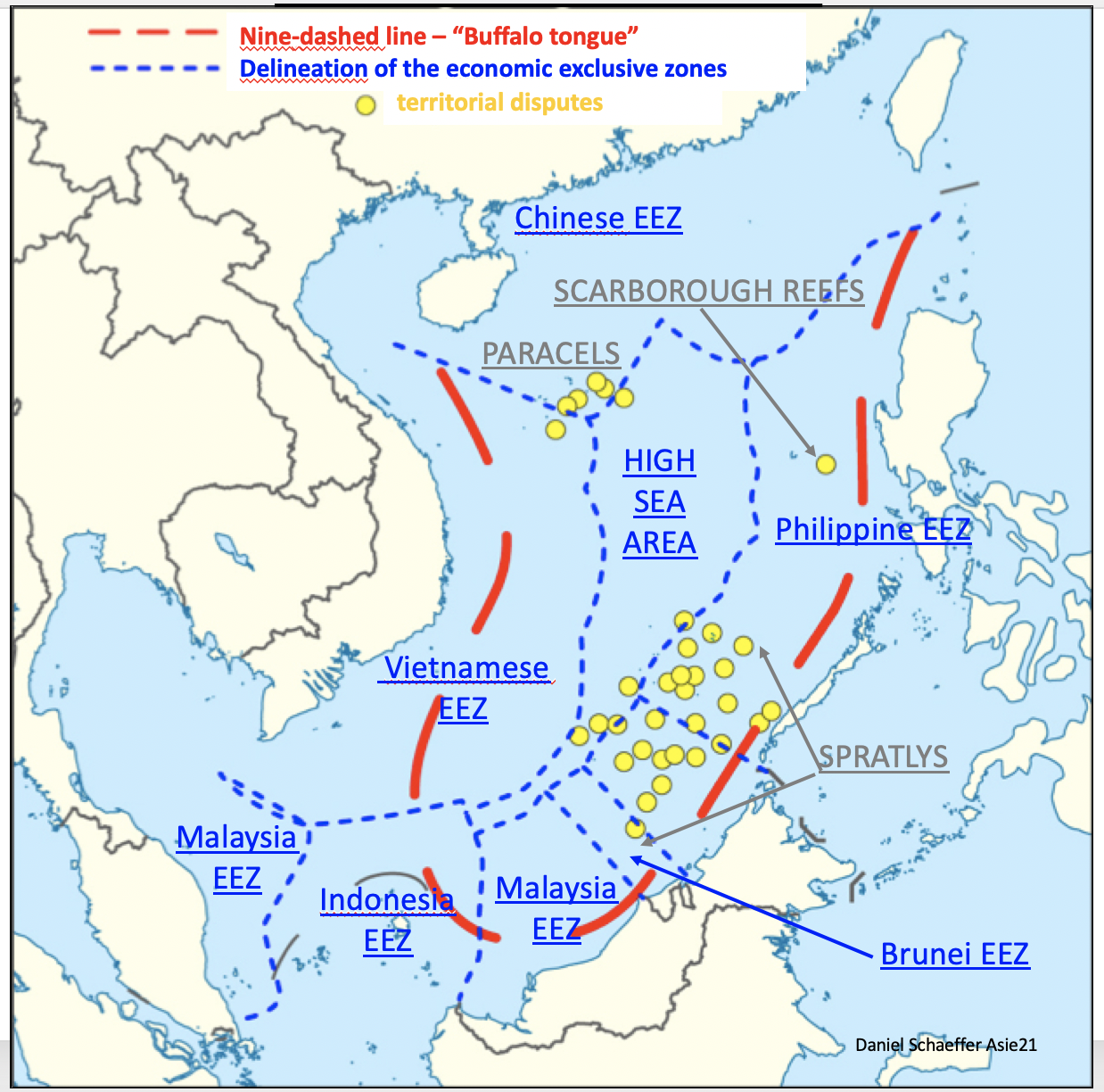 Map : Overlap of the South-East Asian nations’ EEZs by the « buffalo tongue »

Notice: This issue may be reproduced at will provided Asie21.com (www.asie21.com) is clearly quoted as the original source.

By continuing to negotiate a future code of conduct (COC) of the parties in the South China Sea, the South East Asian nations are preparing a situation worse than today in their relations with Beijing, at least as long as the nine-dashed line that borders the “buffalo tongue” over that sea has not been deleted. Explanation.

On the occasion of the 18th ASEAN-China Senior Officials’ Meeting on the Implementation of the Declaration on the Conduct of Parties (DOC) in the South China Sea, held in Dalat, Vietnam, on October 15, 2019, it appears that the participants in “the meeting had a full exchange of views on the second reading of the COC text”[1]. This means that the negotiations on the future code of conduct of the parties in the South China Sea are proceeding faster than it had been announced at the end of August 2019. The negotiations planned at that time were scheduled to resume in October, not on the COC itself, but on the Single Draft South China Sea Code of Conduct Negotiating Text. That means how much the ASEAN countries bordering the South China Sea appear to be in a hurry to elaborate a text supposed, but only supposed, to guarantee them, once finalized, some tranquility when, exerting their legitimate sovereign rights, they exploit their own respective exclusive economic zone (EEZ). That second reading will be, for sure, endorsed on the occasion of the next ASEAN summit and related summits to be held between October 31 and November 4, 2019 in Bangkok.

But beyond such an optimistic progress of the negotiations, some doubts are casting their shadows as far as the consequences could result when the COC is adopted and applied. It is what is suspected when Teodoro Locsin Jr, Foreign Affairs Secretary of the Philippines, met with former Australian Prime Minister Kevin Rudd on September 25, 2019. On that occasion, when he revealed that the first draft of the COC had been completed, he clearly expressed his concerns this way: « It is implicit recognition of China’s hegemony. In short, a manual for living with a hegemon or the care and feeding of a dragon in your living room ». A queer remark from a governmental authority at the moment when his president, Rodrigo Duterte, coordinator of the ASEAN – China relations until 2021, is so keen to reach an agreement quickly. But such a reaction coming from Locsin is quite revealing of the anxiousness that assails most of the ASEAN members’ minds.

So, with such a consciousness of what an excess of power a future COC would provide China against the riparian countries of the South China Sea, why are the negotiations continuing and are not suspended? Moreover after China created so many troubles to Malaysia in the area of Luconia breakers in May, when since last summer China continues exerting a lot of pressures over Vietnam on Vanguard bank, at the farthest southwest of Spratly islands, as well as on block 06-01, and for more than one year over the Philippines around Thitu island and Second Thomas shoal. If China is behaving that way today, it shall be worse tomorrow once the COC is adopted, at least as long as Beijing continues refusing to delete the nine dashed line, line denounced with “no legal effect” by the Permanent Court of arbitration on the 12th of July 2016, line which draws a “buffalo tongue” over that huge part claimed by China over the South China Sea.

If China today already considers that Vietnam, Malaysia, Philippines are wrong when they exert their legitimate sovereign rights in their own respective EEZs but in sectors overlapped by the “buffalo-tongue”[2], if China today already considers those countries as treading on its own rights, then once the COC is adopted Beijing will consider them as trespassers and as such condemnable. But the situation will become worse for these presumed trespassers from the moment they will not be judged by an international court but will be judged by a Chinese one elevated to an international level, even though, once, China cautiously took to making clear that these courts shall be parallel to but not in replacement of the international ones already existing.

Later, under this general idea, things are becoming a little bit clearer. On March 12 2017, Xinhua news, quoting a report of the Supreme people’s court, said that “China has extended its maritime jurisdiction to cover all seas under its jurisdiction in an effort to resolutely safeguard the country’s maritime rights and interests”. And “According to the regulation in effect since last August 2016, jurisdictional seas not only include inland waters and territorial seas, but also cover regions including contiguous zones, exclusive economic zones, continental shelves, and other sea areas under China’s jurisdiction. Chinese citizens or foreigners will be pursued for criminal liability if they engage in illegal hunting or fishing, or killing endangered wildlife in China’s jurisdictional seas”. Therefore here we are.

As a matter of fact, isn’t it clear enough that “sea areas under China’s jurisdiction” encompass the “buffalo tongue”? And in these conditions isn’t it deductible that the COC will open the door wide to Peking to let it, at its own will, sue the ASEAN country considered the culprit, although the latter will be exercising its legitimate rights in its own EEZ but in a part cut by the “buffalo tongue”?

At present it is amazing, except from very few observers[6], researchers[7], analysts, rare politicians such as David Stilwell, US assistant secretary of state for East Asian and Pacific Affairs [8], jurists such as Filipino Supreme Court Senior Associate Justice Antonio Tirol Carpio[9], who all are trying to ring the alarm-bell, to see how the ASEAN negotiators seem to turn a blind eye on this future danger. Even governments from the United States and Europe, which are calling for a binding code, seem to be quite unaware of that expectable Chinese behavior once the code is adopted.

As long as the nine dashed line has not been deleted, when the ASEAN countries continue negotiating a code of conduct of the parties in the South China Sea they are for sure weaving the Chinese rope with which they will be hanged. Do they really want to commit such a political and strategic suicide?

[1] The 18th ASEAN-China Senior Officials’ Meeting on the Implementation of the Declaration on the Conduct of Parties (DOC) in the South China Sea Successfully Held, Ministry of Foreign affairs of the People’s Republic of China, 2019 October 16th, available at https://www.fmprc.gov.cn/mfa_eng/wjdt_665385/wshd_665389/t1708862.shtml

– Shannon Tiezzi, China’s Plan for Lawfare in the Maritime Domain, “Lawfare” at work in the maritime domain, The Diplomat, 15 mars 2016, accessible à http://thediplomat.com/2016/03/chinas-plan-for-lawfare-in-the-maritime-domain/.

[8] US warns of SCS code of conduct with China, Philippines Institute for maritime and Ocean Affairs, October 19, 2019, available at https://www.imoa.ph/us-warns-of-scs-code-of-conduct-with-china/